The Lunn’s Hackle Caperer was first used on 17th May 1917. John Waller Hills recalls, how a Club member caught with it eight trout, of which no fewer than five were found rising on Black Lake, and were landed one after the other. And he only fished part of the day. Hills’ describes the Caperer as:

a wonderfully useful fly, and kills in every weather, no water being too low, or sun too hot, or sky too bright.

William intended this fly as an imitation of what F. M. Halford named as the Welshman’s Button, Sericostoma personatum, and not fly that is known today as the Caperer, Halesus radiatus. The natural is in abundance from the end of May or the beginning of June. Halford remarks that:

usually in the forenoon, there suddenly appear great numbers of this fly, which seems to be in continual motion on the surface as if struggling upon the stream.

The pattern is as follows:

Body, four or five strands from turkey tail feather, two strands from swans feather, dyed yellow to make a ring of yellow in the centre of the body.
Hackle, one Rhode Island cock hackle and one black cock hackle.
Tying silk, Pearsall’s gossamer, No. 13.
Hook, 1 to 2 (size 14 to 12)

There are no reviews yet.

Be the first to review “Hackle Caperer” Cancel reply

This site uses Akismet to reduce spam. Learn how your comment data is processed. 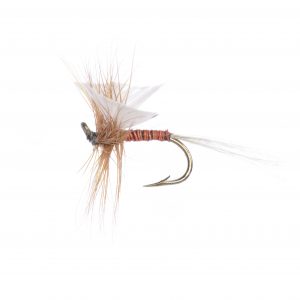 The Lunn’s Houghton Ruby an imitation of the female iron-blue spinner, one of the trouts most favourite meals. The ruby in truth was William’s second attempt at copying a spent iron-blue. His first attempt, christened Lunn’s fancy, while liked greatly was replaced in 1917 by the better Houghton Ruby. It is a fine example of what makes Lunn’s flies so special, sitting as it does in the upper film of the water with it’s broad wings laid out defining the shape of the natural perfectly from the trout’s view-point. 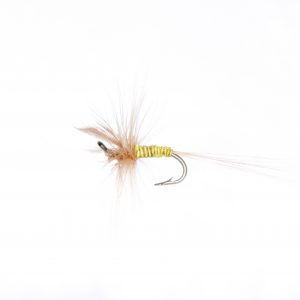 The Lunn’s Yellow Boy invented in July 1917, as an imitation of the pale watery spinner (Baetis inoculates cenroptilum Luteolum). There are two patterns: one hackled and one winged with the wings lying flat. John Waller Hills records in his book River Keeper, published 1934: “Lunn has found that they go by the seasons, in some years the hackled and in others the spent copy being better.” The Yellow Boy catches fish from mid-June onwards especially on early fine evenings. 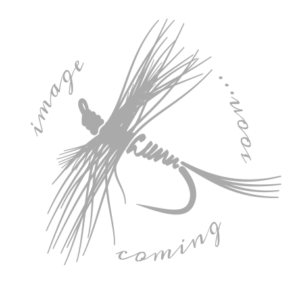 The Lunn’s Big Orange Partridge Hackle invented in 1923. Partridge Hackles were an old north country fly first mentioned in 1496 in the earliest list of flies in English. Lunn’s version kills floating, or awash, or sunk and John Waller Hills considered it the best under-water fly at Stockbridge, better than any other sunk fly or nymph. He remarked that it was:

invaluable in all weathers but especially potent when you have risen but not pricked a fish on some imitation of the olive. 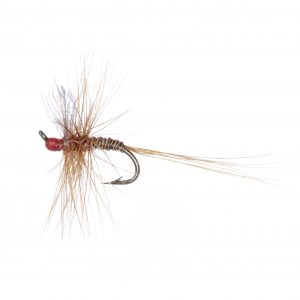 The Lunn’s Particular invented in the spring of 1917, is the most famous of W. J. Lunn’s dressings. John Waller Hills remarked in his book River Keeper, published in 1934:

“It kills well when fish are taking olives, and is marvellously good when they are shy or are taking spinners. It succeeds sunk or floating. If I had to be limited to one fly, I should choose it.”

Originally tied as an imitation of the Large Dark Olive, Bætis rhodani. However, with a wider variety of sizes and with a pair of lighter hackle point wings in summer, it is also an admirable representation of many of the other olive species.
The pattern gets its name from its first outing on 26th April 1917 which is told in the River Keeper as follows:

Mr. Gilbey was fishing Park Stream. He had fared badly, and not even the famous extractor could do its business. He turned to Lunn and said, “The trout are too particular to-day.” So Lunn pulled out his new fly and asked him to try it. He did so, caught three fish, and then the short spring rise was over. “Why, what’s this fly?” said Mr. Gilbey. “It’s a Lunn’s particular.”

Any cookies that may not be particularly necessary for the website to function and is used specifically to collect user personal data via analytics, ads, other embedded contents are termed as non-necessary cookies. It is mandatory to procure user consent prior to running these cookies on your website.